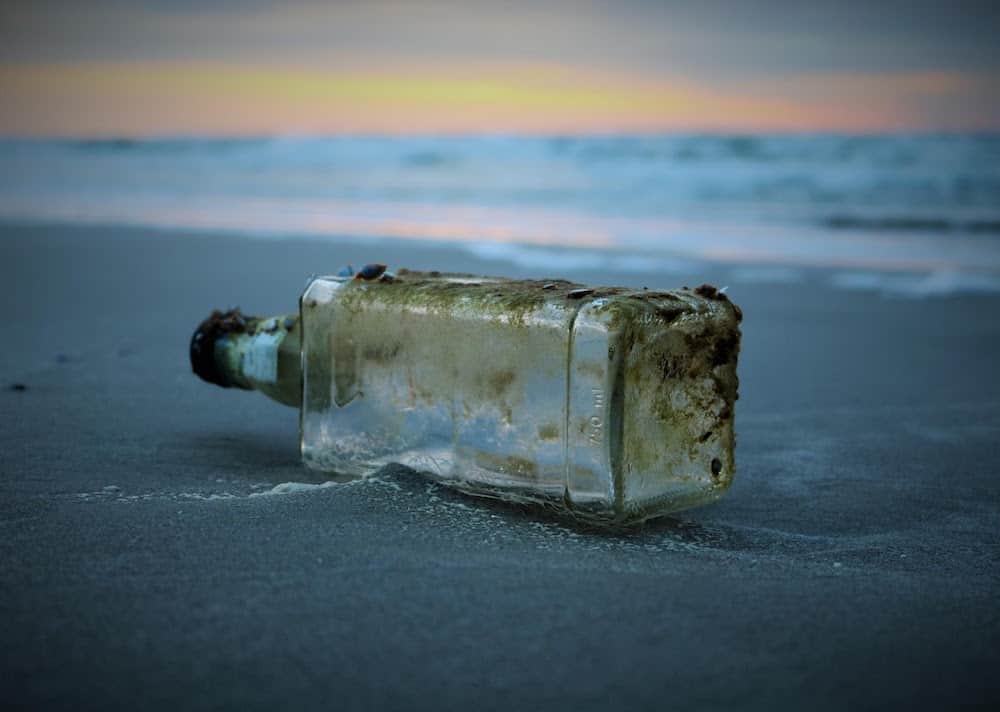 Using blockchain technology, the Plastic Bank offers a secure and transparent way to monetize ocean-bound plastic with a dual mission of protecting the environment, and banking the unbanked in some of the world’s poorest regions.

David Katz was first awakened to the horrors of ocean plastic while on holiday in Manila, where the sight of high volumes of plastic waste was striking in the otherwise clear water of Manila Bay. Travels around the world opened his eyes to the extent and gravity of the problem: beaches with more plastic than sand, seabirds and marine animals injured and dying because of plastic trash, and the adverse health and socio-economic impact on local communities.

Roughly 8 million tons of plastic is dumped into the oceans every year – that’s a garbage truck of plastic entering into our waters every minute. Unless humanity cleans up its act, by 2050, there will be more plastic than fish in our seas.

Plastic has become an integral part of our everyday life. Yet in many conflict-, disaster- and poverty-ridden countries where getting food on the table is a struggle for most, recycling – unsurprisingly –  is not on top of people’s minds. 80 percent of ocean plastic pollution originates from inadequate land-based solid waste management.

“If you were to walk into a kitchen, sink overflowing, water spilling all over the floor, soaking into the walls, what do you do first? Why don’t we turn off the tap? It would be pointless to mop or plunge or scoop up the water if we don’t turn off the tap first. Why aren’t we doing the same for the ocean?”  Katz thought there had to be a business solution to ocean plastic, and called his partner, Shaun Frankson, to suggest an idea for their next venture: the Plastic Bank.

The social enterprise, established in 2013 in post-earthquake Haiti, incentivizes people to collect and return plastic waste in exchange for money or credit towards life essentials such as cooking fuel, medical insurance, electricity, mobile phone and Internet subscriptions or school tuition. Collectors are often homeless, and a phone number is their sole means of identification or communication, while the vouchers received is their only way to send their children to school, which in Haiti is fee-based.

The Plastic Bank helps build recycling infrastructure in the world’s poorest countries, such as Haiti, and addresses the inefficiencies of existing informal systems in highly urbanized areas such as Sao Paulo in Brazil or Manila in the Philippines.

Collection centers are built in close consultation with local communities, and are run by local entrepreneurs to ensure that the operations are self-sufficient and sustainable on the long run – people living below the poverty line are offered a stable source of employment, often earning twice their regular income as a result.

The collected plastic is transported to an independent local partner for processing into bales, flakes, or pellets, and that new feedstock is delivered to corporate clients to be manufactured into new products.

Corporates pay a premium on the market price, which allows the social enterprise to provide greater financial returns to its collectors. Providing a fair price to the plastic scavengers and maintaining that price stability is what sets the Plastic Bank apart from existing intermediaries – the social venture reinvests all of its profits and strives to inject as much wealth as possible into the local economies of the collector communities.

Social Plastic®, a term coined by the Plastic Bank, “is a globally recognizable and tradable currency that, when used, alleviates poverty and cleans the environment. It’s a material whose value is transferred through the lives of the people who encounter it, rich and poor.”

Social Plastic® transactions are supported by a banking application, created in partnership with IBM, and powered by blockchain technology. Earnings are directly transferred into a digital wallet, which guarantees security against theft, and provides collectors with sufficient collateral to take out a bank loan. The digital wallet offers a perfect solution for the poor who often live under precarious conditions fraught with crime and corruption, and who wouldn’t otherwise qualify for an online bank account.

With its various features, including a reward system and a progress tracker, the app gamifies plastic collection and removes the need to transact in cash. The social enterprise is currently evaluating the potential to add visual recognition using IBM’s cognitive technology to help identify different types of plastic and offer additional rewards to collectors depending on the type of plastic exchanged.

The app also helps corporate clients track their social impact and plastic footprint, providing crucial data for CSR and sustainability reporting. Companies are able to take advantage of the plastic offset feature, which – inspired by carbon offset initiatives – allows them to account for recycled plastic purchased from elsewhere.

IBM’s LinuxOne system is crucial to bringing transparency and security to the system, especially in developing countries where trust levels in cash-based systems are at an all-time low. Blockchain provides traceability and accountability for every transaction within the Social Plastic® economy, and with additional features like smart contracts, the Plastic Bank aims to operate free from human interference and the risk of corruption.

The world recycles only 14% of its plastic – monetizing the remaining 86% could create $80bn-$120bn in revenues, according to a recent report by the Ellen MacArthur Foundation. By revealing the true value of plastic, and making that value accessible to everyone, the Plastic Bank encourages people and companies around the globe to reconsider their plastic disposal practices, and become active drivers of the circular economy. 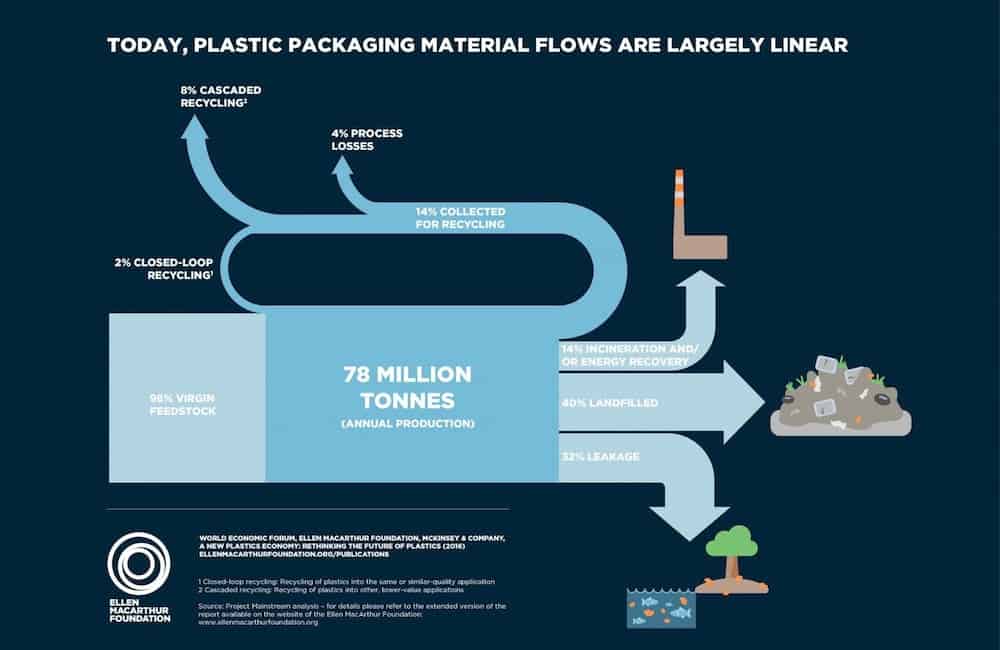 Collection centers in Haiti support a total of 1800 collectors and are estimated to have directly improved about 9000 lives. In total, over 8 million pounds (3.6 million kg) of plastic have been cleaned from the environment, the equivalent of 144 million plastic bottles.

Burning plastic in the past was a major source of pollution in Haiti, but educating local communities on the benefits of plastic recycling has contributed to cleaning the environment and advancing people’s economic inclusion.

The Plastic Bank’s unique approach, marrying a robust social purpose with an equally solid environmental mission, has caught the eye of multiple multinational companies, including Shell, Marks & Spencer and Henkel who have since entered into formal partnerships with the social venture.

“Millions of people around the world already rely on ‘waste picking’ to sustain their living, and as a result, are marginalized and stigmatized by the rest of society. By working to formalize their employment, and paying premiums far and above their usual market rates, the Plastic Bank aims to reverse this pejorative characterization, and acknowledge these citizens for the environmental champions they are”, shares Katz.

The social enterprise has since expanded operations to the Philippines and Brazil with plans to enter Indonesia, India, Ethiopia and South Africa in the near future. In partnership with a large US consumer goods company, they are set to roll out a pilot project in July in Bawah eco-resort, an Indonesian island off the coast of Singapore.  The Plastic Bank will build a recycling infrastructure for a community of around 5000 people with plans to expand rapidly to the 17,000 islands that make up the Indonesian archipelago.

The social venture is also in talks with the Vatican, plotting ways to engage the world’s 1.2 billion Catholics to work towards a plastic-free environment. “What if each of them could bring 500g of plastic a week to church with them? That is enough to change the world,” Katz says.

Nearly every country on the planet could benefit from more efficient recycling systems, which is why the Plastic Bank has a global mission of connecting one billion people to the Social Plastic® Ecosystem via the purchase or collection of material.

“Maybe cleaning the ocean is futile. It might be. But preventing ocean plastic could be humanity’s richest opportunity.”

From Police Officer to Tech Founder: How This CEO is Using Blockchain to Impact Lives