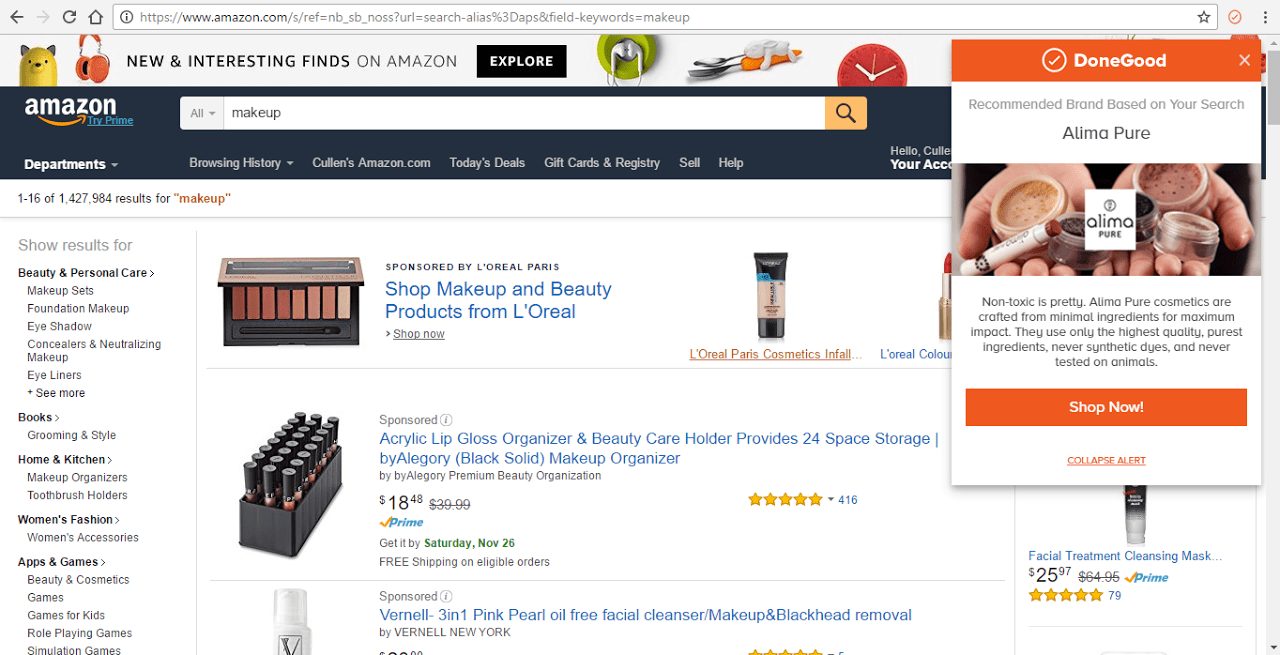 Disruptors for GOOD explores social entrepreneurs around the world who have dedicated their lives to ethical fashion, impact investing, sustainable travel, and businesses that impact the world in a positive way.

DoneGood is an app and chrome extension that makes it extremely simple to discover social impact companies while shopping online.  Just do a Google or Amazon search or go to a big name company’s website and you see ethical, sustainable companies similar to the big companies you already see online.

These social good alternative companies are paying workers well, lifting people out of poverty, preserving the environment and not cranking out cheap stuff in an overseas sweatshop. DoneGood users also get discounts at these social enterprise brands when adding and using the chrome extension.

The #1 problem for social enterprise brands is that they can’t beat the big guys at Google/Amazon searches, but now the DoneGood chrome extension evens the playing field for sustainable companies.

The company also recently made a huge move to go a bit political with its new boycott Trump Feature. The new feature automatically shows a red TrumpAlert (complete with Trump-hair icon–screen shot below) any time a user visits the website of a Trump business or company selling Trump products or sees one of those companies in their Google results. Users can also choose to automatically tweet at the company to tell them to stop selling Trump products and at @RealDonaldTrump himself. The new extension also shows highly ethical alternatives to Trump-supporting companies

Below is a Q&A with Cullen Schwarz, co-founder of DoneGood.

The founders of DoneGood come from a bunch of very interesting backgrounds. How did you guys hook up to build DoneGood and make it a reality?

Scott and I both worked in politics and moved to D.C. in 2007.  I knew the girl Scott was dating so we became friends.  Then Scott and the girl broke up, but we kept being friends. It’s the old timeless tale—boy meets girl, boy meets the girl’s buddy, guy loses girl but keeps the buddy.

But yeah our backgrounds are in communicating and organizing, not tech.

So we looked for a talented engineer who would share our passion for DoneGood’s mission. Scott found Garrett, an app developer out of MIT, on LinkedIn and cold called him. Halfway through their first meeting Garrett said, “Aren’t you gonna make me sign an NDA?” Scott was like nah man we don’t care about all that. We believe in what we’re doing and if other people want to do it too, the world is better off. Garrett joined the team.

Then I randomly bumped into a data scientist in the street. His name was Peter, or as we call him, Peter Data Guy. Peter and I went to the Boston Local Brew Fest, I tasted some whiskeys, Peter drove me home while I sang along to some Taylor Swift song I didn’t know the words to. After something like that you’re pretty much buddies for life. Peter joined the team.

The story with Fleming is less interesting.  We found him on a website where you can find web developers.  I know, boring…  He’s extremely talented. We knew he’d have to take a pay cut to work here—like we all have.  We didn’t think we’d actually get him to come aboard, but he believed in the mission and he did!

Susana and Valerie, designers extraordinaire, were also working out of the Harvard iLab and we met them there.  Valerie actually lived with me and Scott for a few months and somehow she still likes us.  The four of us had a late night dance party singalong to 80s hits one time.  We’ll just leave that story there. 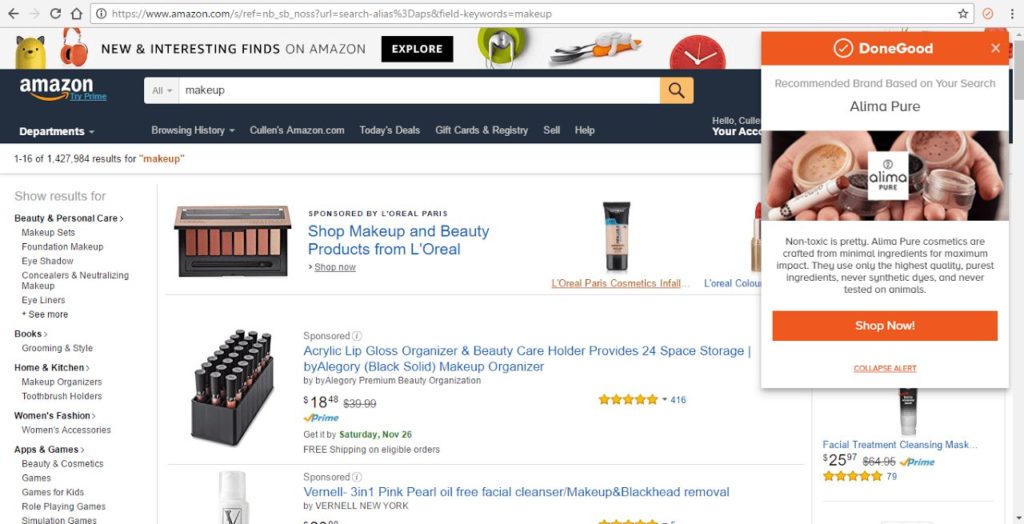 When you speak to ethical brands and social enterprises what are some of the main difficulties they are having and how do the DoneGood tools help the with these problems?

We talked to a lot of social enterprises before we started building anything and asked what their number one problem was.

Unanimously they said, “generating more traffic to my website, getting beat at SEO by the big-name companies.”

We built our browser extension to help solve that problem for them.

What knowledge did you gain from working at the United Students Against Sweatshops that helped prepare you for creating a company that helps ethical brands?

Working with USAS I really saw firsthand what a powerful tool consumer dollars can be for creating change.  In this case the university was the consumer and clothing companies wanted their money.  The university contracts made demonstrating they were making sweatshop-free products was in the company’s financial interest.  I was like man, this is brilliant—imagine if you could get a million people to do the same thing.

Since then the number of people trying to spend their money in accordance with their beliefs has grown a lot.  If we can all keep realigning the system so that a little bit more of the massive amount of money American consumers spend buying stuff makes the world better, that has a really huge impact. 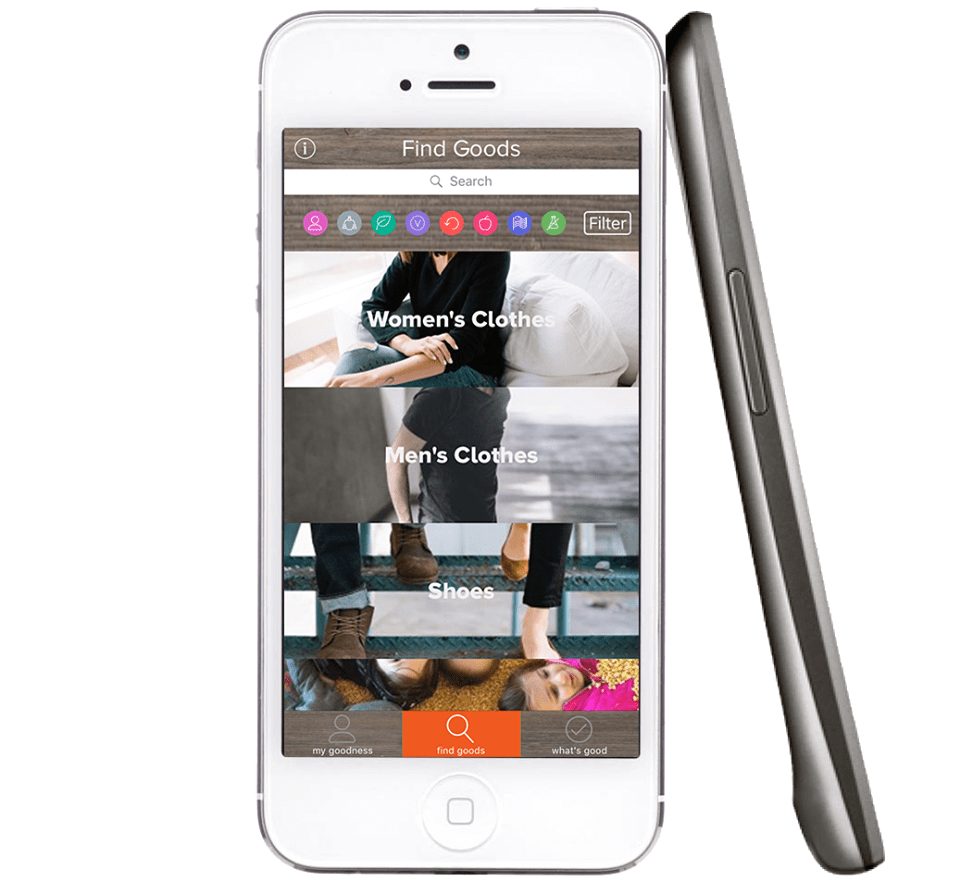 How frustrating and hard was it to build the Chrome extension and the app without being an engineer at heart?

It’s not really frustrating because we have such a talented group of developers working with us.  There was a learning curve for us though for sure.  We’ve learned a lot about the development process.  We’ve also learned to respect what we don’t know.  For example, understanding that while a new feature or other change may seem like a simple concept, it might be more complex to implement technically. It’s important to have discussions with the team about possible new features, how much work each might take, and work together collaboratively to set priorities and realistic timelines.

DoneGood recently made a huge move to go a bit political with its new boycott Trump Feature. Can you talk about how the company chose to take that route?

Ultimately the decision was easy.

We weren’t planning to get directly political with DoneGood. We had political jobs throughout our careers.  We were trying to get out of politics!

The idea for the boycott Trump feature was suggested by DoneGood users. We then surveyed current users and 93% said they wanted the feature while only 3% did not.

The boycott Trump campaign is turning more people onto the idea of using their purchasing power to create change.  We hope we can help people not just spend against Trump, but then also spend for businesses that pay a living wage, preserve the environment, and create a better world overall. 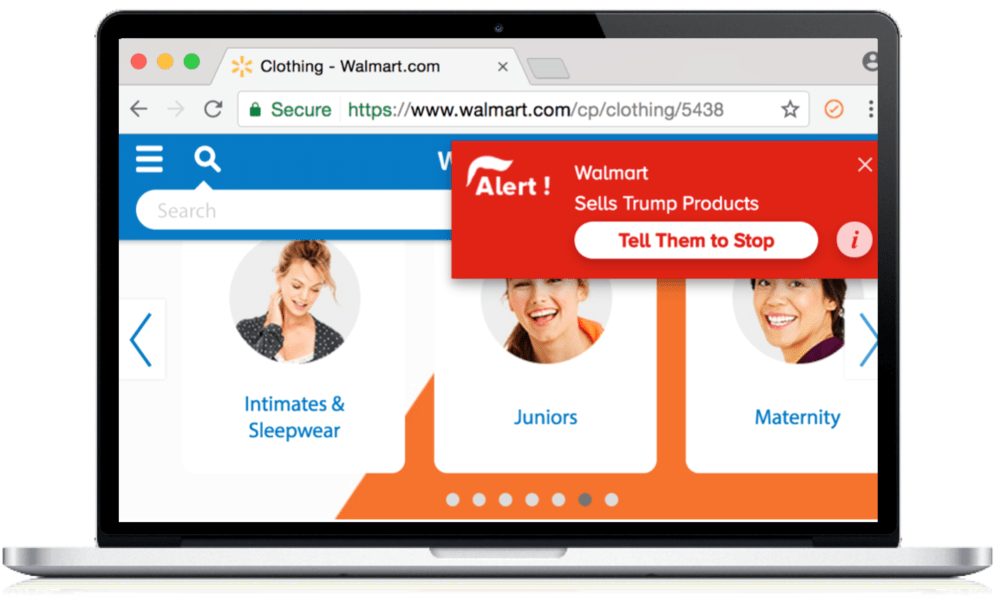 And the fact is President Trump’s agenda lies in direct opposition to the core ideals DoneGood stands for.  He’s voiced opposition to raising the minimum wage, let alone a living wage. He doesn’t believe in climate change.

So Trump’s products are the kind of stuff DoneGood helps people find alternatives to already.

Basically, we felt like this was directly in line with our mission and was something we needed to do.