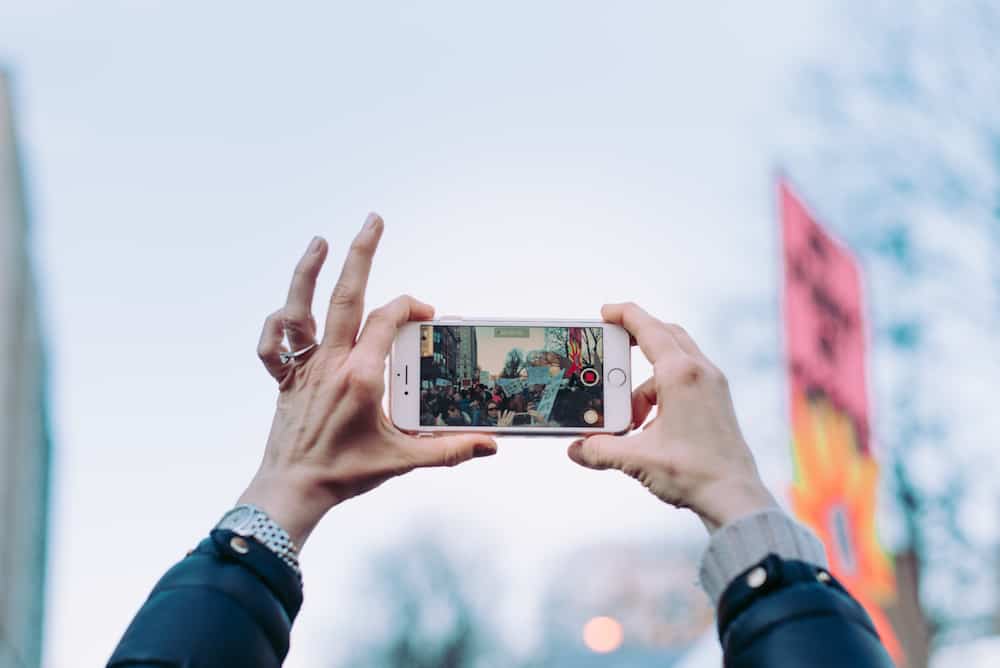 Like many others, I woke up the day after the U.S. presidential election in a stunned stupor. I felt totally disconnected from half of my country. I felt angry and confused. Sure, I’d tweeted and posted about politics, had a few civil arguments with mostly like-minded individuals and made a few small donations to political campaigns. Though, like many others, I was kind of lazy about the future of my country. I take for granted that things typically tend to work out the way they should, that liberty and dignity are a given. I was waking up with a hangover from too many months of slacktivism.

Slacktivism, as defined within this 5,000 word wikipedia article, “is a portmanteau of the words slacker and activism. The word is usually considered a pejorative term that describes “feel-good” measures, in support of an issue or social cause, that have little physical or practical effect, other than to make the person doing it feel satisfied that they have contributed.”

We’ve all been there – making a small donation or sharing a feel-good article or buying a product with 10% proceeds donated to one cause or another.

These actions matter, and there’s no denying they feel good, but they’re not enough.

They’re not enough to build bridges of understanding between communities divide by important issues that affect them differently, including poverty, health, racism and sexism.

We can do more. There’s always more to be done, and the tech community has a very important and useful role to play in all of this. We can all use our tech skills for good.

Hacktivism also has a handy wikipedia definition: “the subversive use of computers and computer networks to promote a political agenda. With roots in hacker culture and hacker ethics, its ends are often related to the free speech, human rights, or freedom of information movements.” Traditionally, this term has been associated with polarizing figures in politics and pop culture ranging from Julian Assange to Mr. Robot. It gets thrown around with words like “anarchy” and “denial of service attacks”, inspiring fear in corporates, governments and individuals alike.

Hacking has many definitions and is by no means a new term, but I’d like to argue it’s a good thing. I’d like to make it into a rallying cry. We should all be hacktivists. Merriam-Webster defines a hacker as “an expert at programming and solving problems with a computer.” The majority of us know how to use computers these days, and I think we all can agree that there are more than enough problems to be solved in this world. 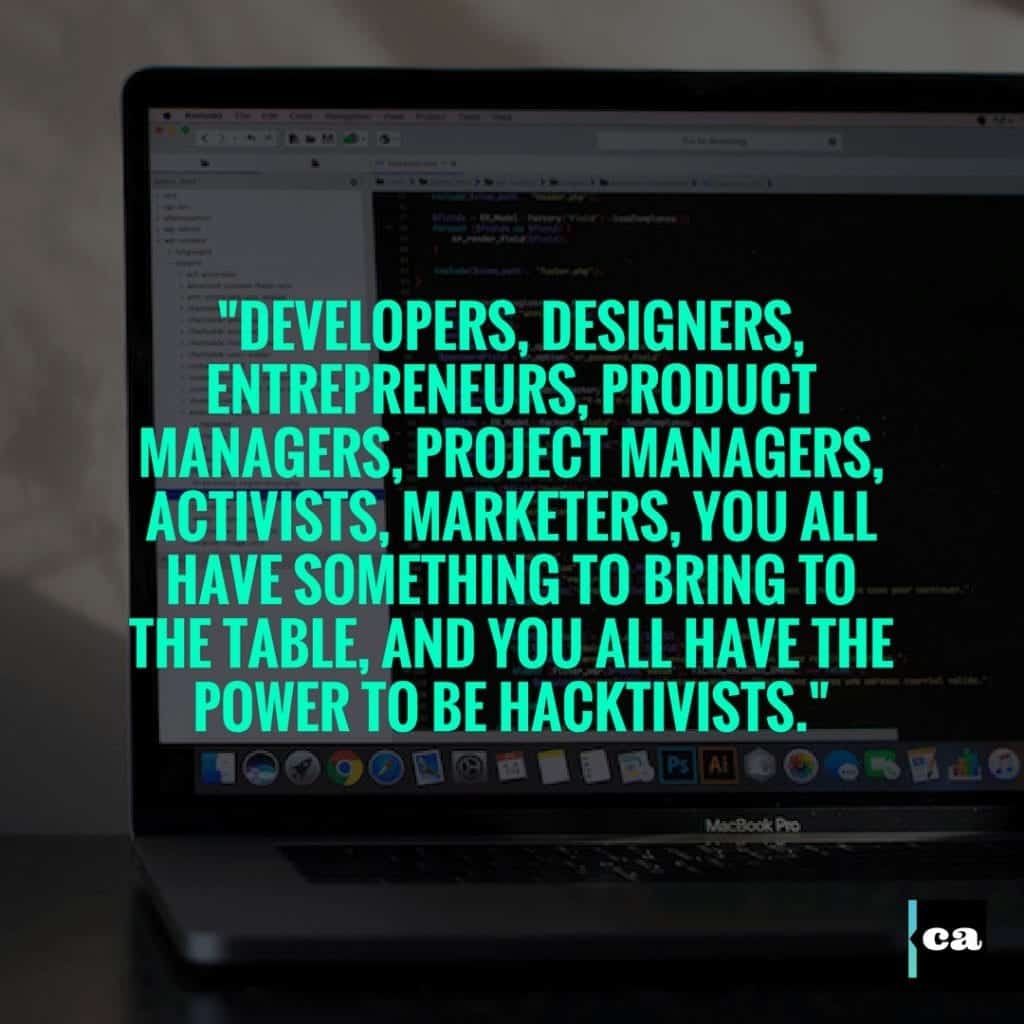 All you have to do is commit to something: commit a weekend to building something that can have a positive impact on social, commit your time volunteering to support someone else building something you admire, commit to show up to the rally or march, or make a commit to that open-source project you’ve had your eye on.

Here are some ideas to get you started:

Find tech projects that cover issues that matter to you. Passionate about the environment? Check out Data Refuge, which is building a refuge for federal data to support climate and environmental research and advocacy. Passionate about politics and civic engagement? Check out Tech Stands Up, a grassroots movement founded by techies in the Bay Area to voice concerns about the effects of government policy on the tech community and its users

Looking for a specific issue or nonprofit to support? I recently spoke with Fadi Azmy, from the Developers Foundation, an organization that builds products to scale charities while giving students real work experience. “We started a year exactly as of the end of this month actually, and we’ve grown from 3 people to over 30 members,” he mentioned, “This started when I was donating clothes and found homeless shelter websites to be horribly ancient while I was a student looking for experience.” They have university chapters in Canada, expecting 5 by next year. Check them out here.

Looking to take your tech skills abroad? I’d highly recommend the mentorship program at Gaza Sky Geeks, it will change your life! They are looking for mentors to bridge that gap and expose Gazans to global best practices in software development and entrepreneurship. Developers, startup geeks, designers, angel investors and more are welcome to apply here.

If you’ve read anything i’ve written before, and you’re still reading – you already saw this coming 😉 Below are a few events to get you started – there are many more to be found, of course! Comment below or tweet me @hazeltrack to add them:

4) Create or Support an Open Source Project for Social Good

If you’re a student, check out Google’s Summer of Code, which features a range of organizations with open source projects that need help. Even if you’re not a student, there are some great examples of organizations and projects in need of help! Check out Code For America’s Civic Tech Issues . You can also poke around GitHub – search for “social impact”, “social good”, “tech for good” and more to find some pretty cool projects to work on, for example TechforgoodCAST/awesome-tech for good or Code4SocialGood/c4sg-web.

5) Volunteer to Give Back

Not a coder? Looking to get off the computer and maybe get outside? There are an endless amount of volunteer opportunities, particularly in the Bay Area. Startups Give Back hosts fun meetups for startup-minded folks at least 1x a month. The Taproot Foundation helps business professionals volunteer their time to deliver marketing, strategy, HR, and IT solutions for nonprofits.

6) Nominate a Nonprofit to Benefit from a Hackathon (opportunities in 50 cities worldwide!)

AngelHack’s 10th Global Hackathon Series will reach 50 cities worldwide this year, and we’re inviting local nonprofits to apply to offer a challenge in their hometown for an initiative called Commit to Your Cause. You can nominate a nonprofit this form.

Tell me what I’m missing.

What other awesome opportunities are out there for hacktivists? Share in the comments below or tweet me @hazeltrack.

Rachel oversees social innovation at AngelHack, which operates the world's largest developer ecosystem. In this role, she has been part of planning more than 100 hackathons, including a multi-city hackathon series called Lady Problems, focused on leveraging technology to tackle problems preventing female entrepreneurship. Prior to AngelHack, she worked in the philanthropy sector as a strategy consultant for corporations, high-profile and high-net worth individuals and nonprofits.

Meet Vera, The New Platform That Makes it Easy to Offset Your Plastic Footprint