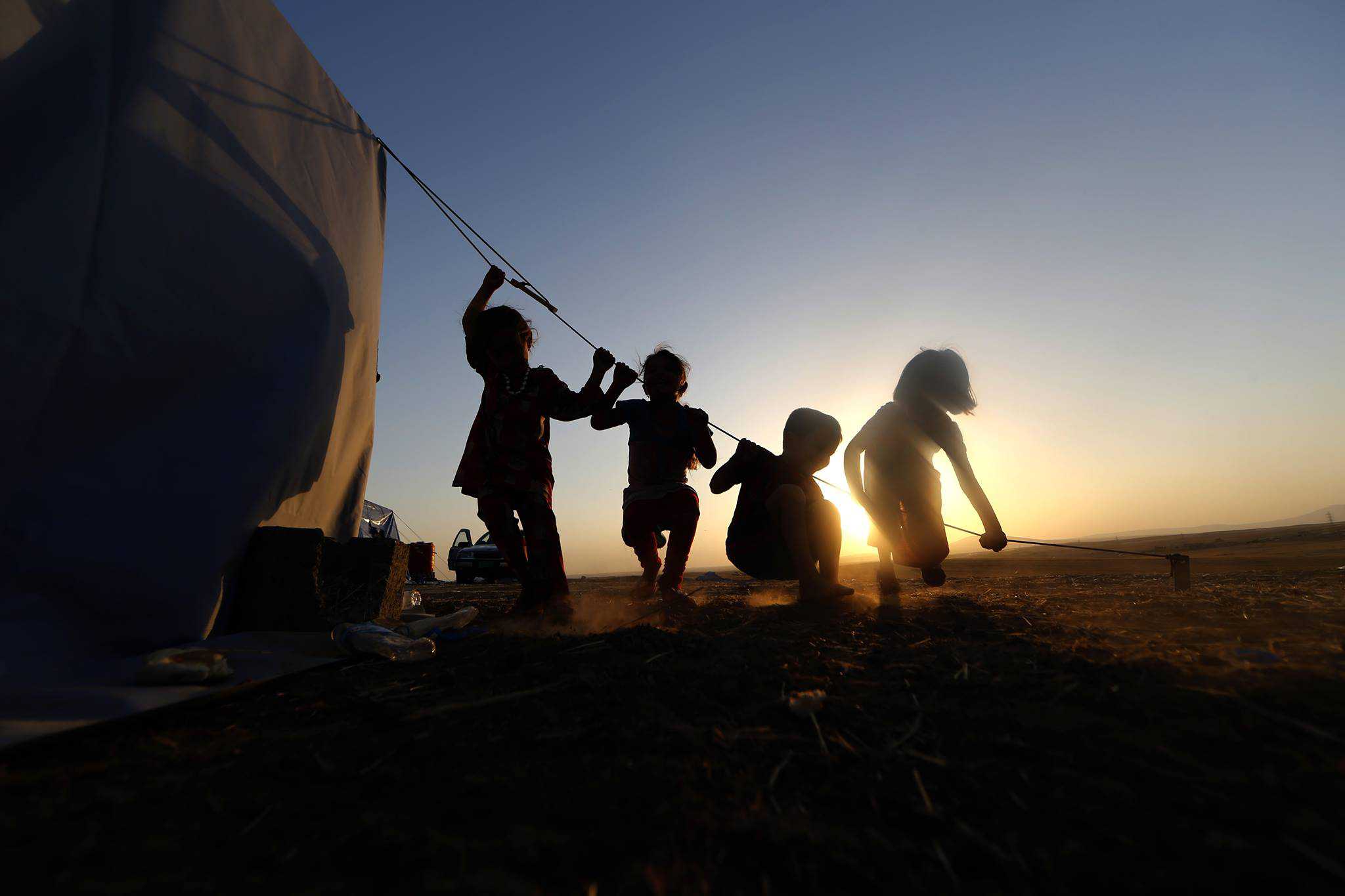 Refugee and crisis, not two words that generally start an inspirational article or thought process, but hey, I’m going to take a swing at it. Although the statistics are daunting:

Daunting Statistic – 65.6 million people around the world have been forced from home.

Daunting Statistic – There are 22.5 million refugees, over half of whom are under the age of 18.

Daunting Statistic – More people have been forced to flee their homes by conflict and crisis than at any time since World War II.

there are some incredible people and companies rolling their sleeves up and making some real things happen. Like any other global crisis, in any sector, the private sector must play a major role in solving the issue. As technology, business, finance, and global supply chains begin to merge more and more; it presents an opportunity for private and public partnerships to come together and connect refugees to opportunities that were not possible 30-40-50 years ago.

The question know becomes: How do we get these private and public partnerships to come together and solve the refugee crisis and do it in the sectors they already specialize in? The Tent Foundation is an innovative organization stepping up to make this happen. Founded by Hamdi Ulukaya, CEO of Chobani(yes, the yogurt company), The Tent Foundation has a laser focused mission on bringing together some of the largest companies in the world to use business as the tool for solving this complex issue.

Ok, but how can business solve the global refugee crisis? The Tent Foundation illustrates it comes down to three main objectives.

The first is innovating the global supply chain. Companies can advance their businesses and improve the livelihoods of refugees by hiring refugees as employees, sourcing from refugee-owned businesses, and sourcing from businesses that employ refugees.

Example: WeWork will employ 1,500 refugees over the next five years, beginning in the United States and United Kingdom. WeWork will also invite its 20,000+ member companies and the broader business community to match its hiring goal.

Example: Starbucks is leading a global effort to welcome and employ 10,000 refugees by 2022. In the U.S., initial efforts are focused on Iraqi and Afghan refugees who have served as interpreters for the U.S. Armed Forces.

The second is delivery systems. Businesses can reach refugees directly and engage refugees as customers by adapting their goods, services, and delivery systems to meet the needs of refugee communities.

Example: Airbnb is providing temporary accommodations for 100,000 displaced people and supporting their local integration into communities across Europe and North America.

Example: LinkedIn is growing Welcome Talent, which focuses on career development and job accessibility for refugees, to additional countries beyond Sweden. To date, LinkedIn has expanded Welcome Talent to Canada and the U.S. after reaching 3,000 refugees in Sweden in 2016.

The third is impact investing. Companies can invest directly in refugee entrepreneurs, refugee-owned small and medium-sized enterprises, social enterprises that meet refugee needs, and businesses that hire and source from refugees.

Example: Generali, through the Human Safety Net, is empowering refugees to set up 500 new businesses by 2020. Starting in Germany and France, refugees can access a competitive 6-8 month program of incubation, training and funding to equip them with the skills, resources and tools for becoming successful entrepreneurs.

Below is a really insightful Q&A with the Executive Director of The Tent Foundation, Gideon Maltz.

How did you first meet Hamdi(CEO of Chobani) and how has he been a leader for the refugee crisis?

I first met Hamdi when I was working for Samantha Power, the US Ambassador to the United Nations. Samantha understood very well that, even with the best intentions, governments could not address the crisis alone, and she saw in Hamdi a visionary business leader who was well positioned to rally the business community to step up. Hamdi has led by example, first in hiring refugees alongside members of the local community at Chobani’s factories, and then in creating the Tent Foundation.

As companies reach out to you or vice versa what is the biggest need for the refugee crises at the moment that these corporate partnerships try and tackle?

At the onset of a crisis, such as the recent wave of Rohingya refugees fleeing Burma, there’s an urgent need for humanitarian assistance — food, medicine, shelter — and humanitarian relief organizations generally do a great job delivering this. But, we now know that refugees rarely can go home quickly — instead they remain in exile for an average of more than ten years. That means that they need to create new lives and livelihoods in their new countries. That’s where the business community has such a vital role to play — in hiring refugees, investing in their enterprises, and delivering services to them as they build new lives.

How can global supply chains be a powerful force for the refugee crisis?

More than 80 percent of the world’s refugee population lives in developing countries. Large U.S. companies may not always have their own operations in these countries, but invariably they have supply chains that touch these countries. For example, major clothing brands source from Turkey, Bangladesh, Jordan, and Ethiopia – all countries with significant refugee populations. Multinational companies can create incentives for their suppliers to bring refugees into the workforce.

In your experience what are some of the most common misconceptions about refugees?

The most common misconception — held mainly by people who’ve had little exposure to refugees — is that refugees are somehow lazy and leech off others. Nothing could be further from the truth. We hear again and again from businesses that refugees are some of their hardest-working employees, that refugee workers are more loyal and stay with employers for longer, that refugees repay loans at higher than average rates. Refugees are highly motivated and eager to rebuild their lives.

To date what has been the most impactful partnership or strategy in solving a certain issue dealing with the refugee crisis?

We hate to play favorites with our partners, and there are a number of partners that, through very different projects, are making a significant difference in the lives of refugees. But as an example, I’d point to an IKEA initiative that we think is very important and has huge potential. IKEA is working with theJordan River Foundation in Amman, Jordan, to employ about 100 Syrian refugees and Jordanians to produce artisanal goods – like hand-sewn pillows – that are being sold in select IKEA outlets. IKEA plans to start selling these products in U.S. and European outlets this year and continue to expand production – and their workforce of Syrian refugees and Jordanians. It’s a terrific example of a company integrating refugees and members of the host community into their business operations in a way that delivers value for the company and changes the lives of their employees.

What particular issue or industry at the moment is in need of an excellent business partner?

There’s a huge need in many countries for refugees to access financial services – whether that’s setting up a bank of account or taking out loans to start a business. Banks and other traditional lenders are often hesitant to serve refugees because of a combination of factors, including perceived flight risk, lack of credit history, missing documents, or simply failure to conform with procedures that were created with residents in mind.

As a result, refugees face steep challenges, especially in borrowing money to start new enterprises that could contribute to the local economy and create jobs.

An NGO operating in Tukey, Building Markets, found that Syrians have started more than 6,000 companies with initial investments of $334 million. (That seems like the tip of the iceberg!)

There is a real need for institutional lenders – both large and small – to get involved and figure out how to tailor their operating procedures to serve refugees’ distinctive needs – and also for tech companies to find creative workarounds or substitutes for some of these challenges. This isn’t asking for charity – it’s asking for companies to bring their business services to a population that needs it.

What are some tangible things that the general public can do to help the refugee crisis?

First, members of the public should donate to the NGOs like the International Rescue Committee that do amazing work with refugees in the US and overseas. Second, they should “vote with their dollars” by supporting the companies — like Starbucks, Airbnb, and IKEA — that are making significant commitments to help refugees. Third, members of the public should vote at the ballot box— it’s the best way to ensure that we have government policies that reflect what had been a longstanding, bipartisan commitment to helping refugees.

10 Social Impact Experiences to Explore at Your Next Airbnb

From The Refugee Crisis To Newborn Babies, Can Blockchain Reform International Development?

7 Brands Impacting The World Through Helping Alleviate The Refugee Crisis