House Louisiana was a three month building project that changed the lives of a family in Cormiers, Haiti through social impact architecture and sustainable home design. Led by New York artist SWOON and headed by the Heliotrope Foundation and Oficina, the house was constructed for Mama Louisiana and her extended family, one of the many families to lose their home during the 2010 earthquake that devastated Haiti. The House Louisiana project, at its completion, is considered a high— quality, sustainable piece of architecture and a communal work of art that deeply affected the community of Cormiers. 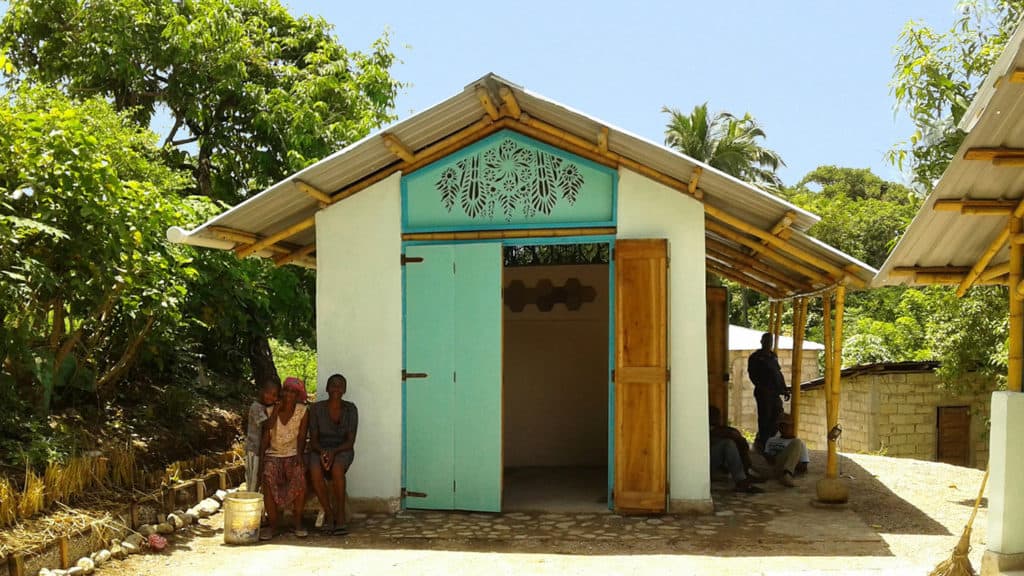 Below is a Q&A with House Louisiana project co-leaders, Joana Torres and Caledonia Curry(SWOON).

Tell us about Mama Louisiana and her family

Joana Torres- Just like the owners of the 2 previous houses built by Heliotrope- Monique and Adelia – Mama Louisana is the leader of her family. She tirelessly takes care of her sons, daughters, grandkids and eventually extended family and neighbors. The best way to describe Louisana is using the Haitian term “Poto Mitan” or in english “Central pillar”, an architectural term often used to describe the central role of women in the Haitian family and society in general: strong, hard working and resilient. Louisana was born and raised her 3 kids in Cormiers. She divides her days between selling treats in the market and domestic and farming activities. Her youngest son died in the earthquake. Her previous house was severely damaged and until February she was living in an abandoned building in highly unsafe conditions.

After successfully funding the kickstarter for the Louisiana house, how were monies utilized in developing and executing this project?

Joana Torres- The greatest part of the kickstarter budget was used in paying salaries to the local community that was hired for the build. Activating the local economy is crucial for Heliotrope, this is especially true in Haiti where unemployment reaches 40% rates in rural communities. For that reason we make sure that our external team is minimal. Rather than bringing a complete team to the site, we hire local people and pay fair wages. The hiring includes not only the building crew, but an array of additional sub-contractors and services hired to serve the crew.
For example, Heliotrope’s crew compensation included one daily meal per person, so we hired a team of people full-time to provide these meals for the 20 person crew. Other expenses were related to the Kickstarter campaign itself: once again, as we collaborated with local artists and artisans to make the rewards and we paid them directly for that. We also invested in good quality construction tools that after the completion of the build became part of a communal library of tools available for everyone to lend. Other costs included the construction materials, although this sum was very reasonable as we made an effort to use local and natural materials. Many materials are inexpensive or simply free – for example the earth for walls.

Inclusion of local community is so important in the realization of influential projects such as the Louisiana House. How did this experience change your views on community and development?

Caledonia Curry – The amazing gift of working in Haiti is the way that the community is so tightly knit. In some places I’ve worked, we spend a lot of energy bringing together the connections among people. In the area where we work in Haiti, everyone is so strongly connected, and the struggles they face are really about a lack of resources and opportunity. This is a rural community with difficult access, and so there are situations where for example, the method of building with cinder blocks has reached the community and taken hold, without the concomitant safety lessons that you’d want to accompany a new building style. So, we weren’t so much building community within the village as we were building community across national barriers.
We brought the knowledge of architects from Mexico, Portugal, the United States, and built bridges to share this knowledge with the already very present and strong community in Haiti, which has been super receptive to the experience. For us I think being able to see such a strong community in action, and being accepted into it, it’s been a huge gift.

Tell us a little about your approach to building these sustainable homes, primarily using bamboo.

Joana Torres – Heliotrope started working in Cormiers in 2010, right after the earthquake. Besides the well known environmental advantages of sustainable building, thinking sustainably was imperative after this tragic event that left the country with no resources in terms of standardized construction materials. Heliotrope saw an opportunity to build shelter with materials that were easily accessible to everyone – geographically and economically. This conviction was translated in three earthbag structures. This inexpensive method of construction uses the local soil to create structures which are both strong and quickly built.

In parallel Heliotrope has been evaluating the possibility of building with bamboo in Haiti. As a living grass, planting bamboo is one the most efficient ways to combat deforestation – a huge problem in Haiti. As construction material, Bamboo is a proven earthquake resistant material due to its capacity of absorbing energy and its high bending strength. There are several species of bamboo planted in Haiti, but bamboo construction is not a common practice yet, we thought this project was an opportunity to set a dialogue between this sustainable material and the vernacular Haitian architecture. Prior to building we assessed that we could acquire local bamboo and treat and dry it  with low tech techniques that locals could replicate.

Through working with The Heliotrope Foundation, what connections have you identified between arts and culture and community development?

Caledonia Curry – What we were able to build with people, and the sense of pride they feel, both to have the houses and community center as standout pieces of architecture in their town, and to be the people who built the structures and understand their unique styles – it has really reaffirmed for me the way that art and culture act as glue. Art and culture give us places to center our focus, to take pride and comfort in simple beauty. Sometimes these things can appear inessential, but when we believe in the quality of life of a community, we find these forces to be very essential. And I think we witnessed that when we arrived, and saw the richness of music and sculpture that was already part of the glue of this community. So again, we were really plugging into a powerful web of interconnectedness that already existed.

Click here to heck out more of the great social impact design work that Oficina is up to.

A 5-Step Guide to Starting a Socially Impactful Business