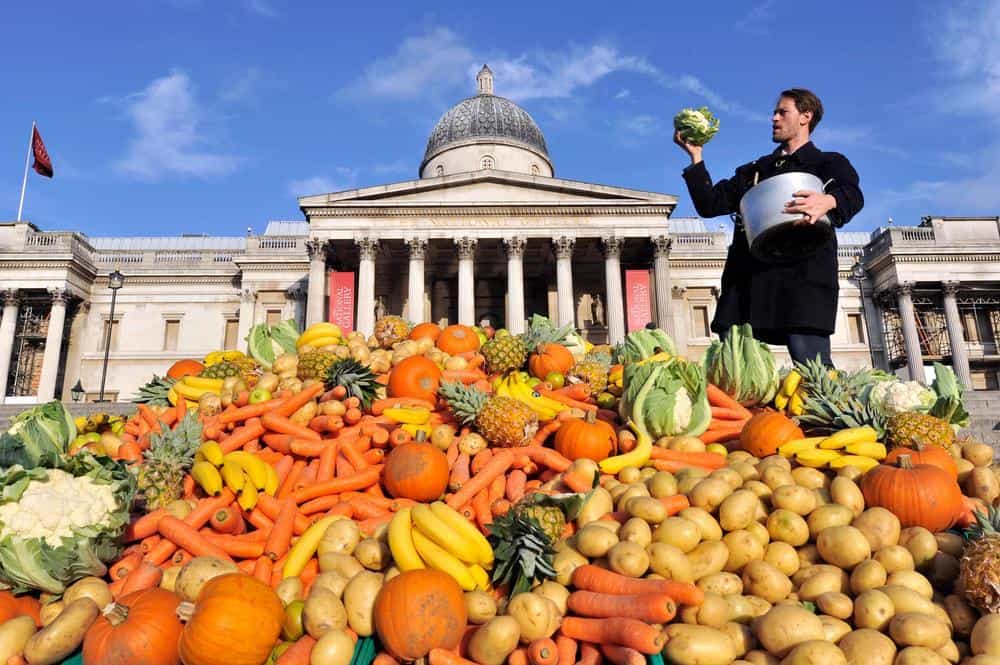 One third of food produced globally is wasted from farm to fork every year, enough to feed 3 billion people, or 10 times the population of the US.

In contrast, one in nine people still go to bed on an empty stomach, and one in three suffers from some form of malnutrition. If food waste was a country, it would rank as the third largest emitter of greenhouse gas after China and the US.

Food waste is generated from our farms, food manufacturers, food distributors, food retailers, supermarkets, restaurants, event caterers, and also our homes. In medium- and high-income countries, 40% of losses happen at the retail and consumer levels. The movement to eliminate food waste is more important than ever, and the following initiatives are ones that almost every household can easily adopt.

7.3 million tonnes of food – worth £13 billion and the equivalent of six meals per week – are binned in UK households annually, according to a 2015 report by WRAP, a charity working towards eliminating food waste. In response to these alarming figures, the social enterprise Edventure opened the UK’s first community fridge to encourage local residents to donate their food surplus to those in need.

Edventure provides clear guidelines for those who would like to donate and those who plan to take away food from the community fridge, including advice to not give away raw meat, fish, eggs or opened milk, and to drop off cooked food from certified food businesses only. Others have quickly adopted the same concept and the first People’s Fridge has opened earlier this year in London – take a look at Edventure’s welcome pack or the Hubbub Foundation’s guidelines, if you would like to set up a community fridge in your own neighborhood.

A similar initiative has been launched in the UAE to tackle the staggering amount of food wasted during the fasting period of Ramadan. The Sharing Fridge campaign offers an opportunity to help feed the less fortunate, including blue-collar workers toiling away in the sweltering heat. The project has grown exponentially with 20 fridges in Dubai at the start to 200 fridges set up across four Emirates, each serving on average 100-150 people.

The number of start-ups, non-profits and social enterprises working towards digitalising and streamlining food recovery has grown by leaps and bounds in recent years, making it easier for individuals and households to share their excess food at the drop of a hat.

FareShare and Food Cowboy facilitates surplus food redistribution between commercial food companies and charities, while Spoiler Alert offers an online B2B marketplace for food donations and discounted food sales and an automated accounting tool to manage unsold food inventory. FareShare and its army of volunteers saves over 13,000 tonnes of food about to be wasted annually, turning them into more than 28 million delicious meals for the most vulnerable segments of society.

The free app Olio helps businesses and households share leftover food with their neighbors and local food banks, shelters and soup kitchens. Since its launch in 2015 in London, Olio has saved over 80,000 meals from being binned and expanded to 41 countries. Keen to get involved? Volunteer your time as a Food Waste Hero, Ambassador or City Champion, growing Olio in your neighborhood, town or city.

3: Find great food near you for less

Olio or Food Cowboy are not the only apps leveraging the power of the sharing economy to reduce food wastage. Social enterprise Too good to go (TGTG) has created a virtual marketplace for food retailers to sell “B-grade” products at a discounted price. These may include unsold food inventory in restaurants and bakeries or food in supermarkets that are nearing their expiry date or are not “cosmetically appealing” to display.

Recovery agencies are often restricted in the quantity of food they can receive by rigorous food safety and transportation guidelines and meagre operational budgets. Apps such as TGTG plug this gap, offering businesses an alternative service to reach new customers, reduce your waste disposal costs and create a positive environmental impact.

Economic incentives are key to make any food waste initiative sustainable on the long run. TGTG creates a win-win scenario – consumers can take advantage of discounts of up to 90% and buy meals from as little as little as £2 from some of the most trending eateries, while restaurants are able monetize their food surplus. TGTG also offers restaurants recyclable take-away packaging and the option for users to donate meals to feed those in need. The food waste app has so far diverted over 1 million meals “from bins to bellies” in just over a year since its launch in June 2016. 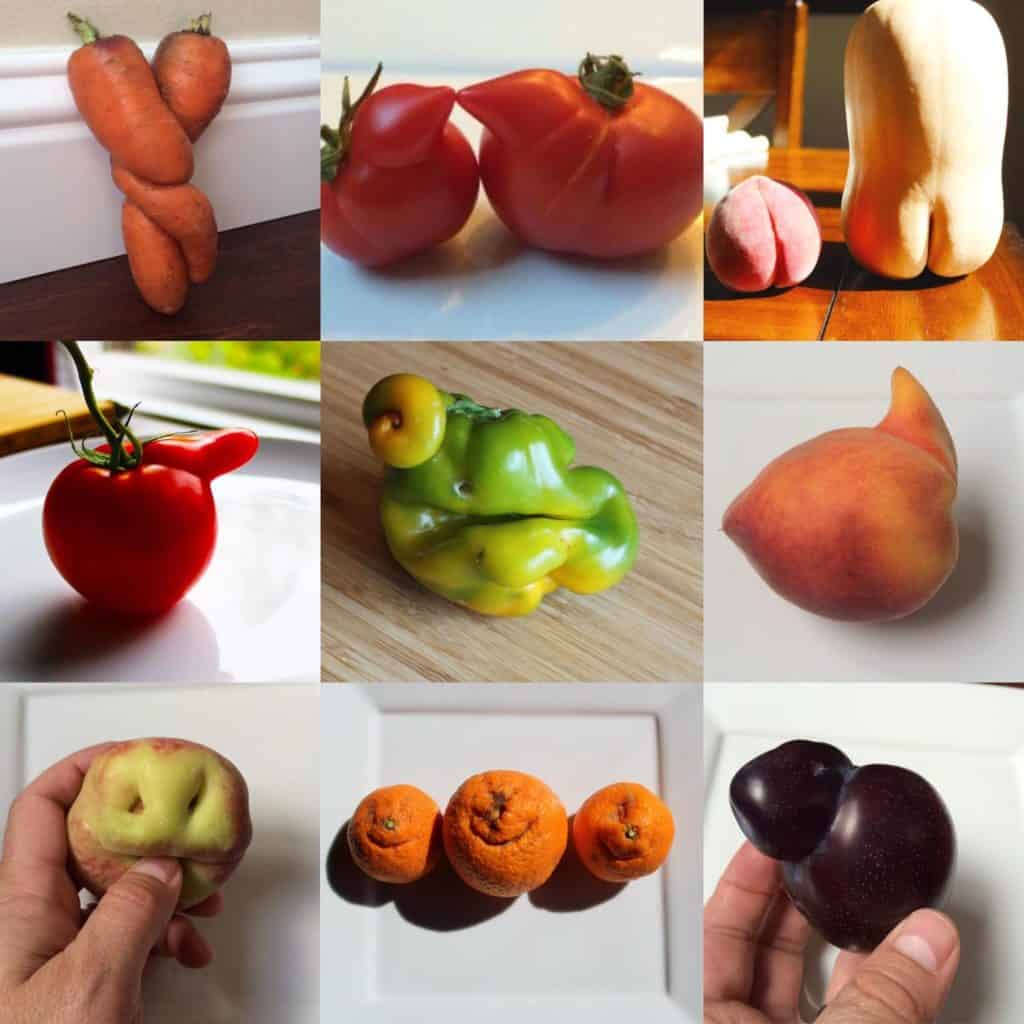 Just as our culture has unrealistic standards of human beauty, as consumers we are also used to the uniformly perfect looking fruits and vegetables seen in grocery stores, and reject discolored, misshapen or smaller sized produce.

The Ugly Fruits and Veg Campaign started off as a volunteer initiative to dispel the common myth that the nutritional value of fruits and vegetables is reflected in their aesthetic looks. One in five fruits or vegetables in the US fails to meet the strict cosmetic criteria of supermarkets and retailers, contrasted with 90% of the population not eating enough fruits and vegetables.

Start-ups such as Wonky Vegetables, Hungry Harvest and Imperfect Produce offer a service to deliver perfectly edible, though not necessarily “aesthetically alluring” fruits and vegetables to your doorstep at almost half of grocery store prices. The movement is going strong: Imperfect has recently surpassed the 5 million pound (over 2000 tonnes) mark in terms of produce recovered through their venture, while supermarkets such as Intermarche in France and Asda in the UK have been trialling wonky fruits and vegetables in their offering.

5: Reduce wastage in your household

The fight against food waste often starts by rethinking our shopping and food consumption habits. Love Food, Hate Waste, an initiative by WRAP, offers useful tips and tools to minimizing and preventing food wastage in your household:

These are just a few examples of the many remarkable ventures set out to fight hunger and wastage – I hope they inspire you to join the revolution to end food waste, one crooked carrot and curvy cucumber at a time.

* Any views expressed in this article are those of the author and not the organizations represented.